It’s a question of… Sankta Lucia and candles

Today, the 13th December, I’ll be making yellow buns, twisting them into strange forms and sticking raisins in them. It’s part of a Scandinavian tradition that also involves young girls dressed in white, walking around with candles and singing.

These joyous celebrations are made in honour of Lucia, patron saint of the city of Syracuse in Italy – which in itself can seem a little strange as the nominal religion in Scandinavia is protestant, and protestants don’t “believe” in catholic saints.

It’s said that Lucia was condemned to be burnt for not wanting to marry a pagan. But she resisted the fire. Another story says she secretly took food to the poor at night and carried a crown of candles on her head so she could see where she was going. A third story has her taking out her eyes to convert a Prince to Christianity. All stories somehow make it possible to connect her with light – and that’s important. Because the 13th December is not only the day Lucia died (a sword finally got her), it was also known as the shortest day of the year (before the Gregorian calendar was adopted), the winter solstice, which of course has pagan roots. In other words, saint or no saint, Lucia is the bearer of light and Lucia Day a celebration of the days getting longer again. 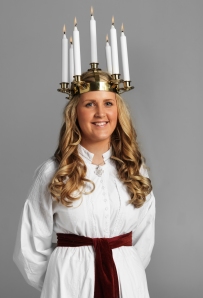 Lucia Day is celebrated in all of the Nordic countries, but is probably taken most seriously in Sweden. Every year there’s a national competition to chose the Lucia of the year (think Miss Sweden without the bathing suits) and most towns have their own local Lucia competition.

When I was a small girl in Denmark, our school (like most others) organized a Lucia procession each year. We all wanted to be the Lucia bride – that’s the girl who leads and who gets to carry a crown of candles on her head (the others just follow holding a single candle). But, at the time, the “politically correct” had not yet been installed and only blond longhaired girls had a chance of getting elected – which excluded me.

A danish version, as I remember it…

The shorthaired and/or dark haired girls got their vengeance later, when the Lucia bride cried as teachers combed candle wax out of her hair or, in some cases, because her hair was burnt… (I’m told that nowadays, battery driven candles are used instead of real ones).

However odd the Sankta Lucia celebration may seem, I love it. So, as my neighbours light their third Hanukkah candle today, we’ll be lighting our third advent candle (another protestant ritual – also done on a crown…) and a whole lot other candles for Lucia, whatever her real story might be. Maybe it all comes down to what the Chinese say: “It’s better to light a candle than curse the darkness”…

A more “professional” swedish version of the Lucia song…

Filed under Everything counts