It’s a question of… escalator accidents

There are things in life you never think about – until they happen to you. Like escalator accidents. And surprisingly, once they do happen and you tell others about it, you suddenly find out that everyone else has an escalator story to tell too.

Considering the awful things I’ve heard from others, my own experience – even though it left me walking through a crowded station in my underpants – wasn’t that bad. Unlike some who have had clothing or shoes stuck in escalators, I didn’t lose any fingers or toes, just my dignity.

For reasons I’m unable to explain, my skirt got sucked into the gap between the side of the escalator and the moving steps one morning in the underground (or subway if you prefer). I tried to pull it out, but it just kept disappearing farther into the gap. Alerted by my (really frantic) screaming, someone pushed the emergency button just in time. By then, I was at the end of the escalator, on my knees, and unable to move.

I stayed in that not so flattering (nor comfortable) position for half an hour while the staff tried to reverse the sense of the escalator and get the skirt free. It couldn’t be done. I was therefore asked to take off my skirt and cross the station (rush hour…) in my that-day-not-so-sexy panties to reach the railway offices. Here, a train operator (who was smiling a little too much) lent me a pair of his spare trousers (and may I add, they were not my size or colours).

I later found out that escalator accidents happen quite often. Apparently, in the States, 10 000 people end up in the emergency room every year because of them (I don’t know the numbers in France). The victims are often children standing too close to the sides or sitting down, or teenagers who don’t do their shoelaces, or silly people like myself who wear too long skirts… Apparently, Crocs shoe wearers are also very escalator accident-prone. And so are dogs. A friend of mine told me of a terrible accident she saw where the dog’s paw got ripped off. Escalators are more powerful than you can imagine.

Before my embarrassing, and yes, a little scary, skirt experience, I never thought about the dangers of escalators. When hearing about accidents, I had the classic “that would never happen to me / my child / anyone I know” reaction. I mean, how difficult can it be to get on and off an escalator? Now, I know better. I take the stairs whenever possible and have become quite hysterical about how and where my son stands on the steps when we do take the escalator. I now also wear pretty underwear every day. You never know…

In the stack of magazines collecting dust next to my bed there are many old Christmas issues. Every year at this time I go through them, reading for the hundredth time about how to make the perfect Christmas dinner, diet in time to fit into my party dress, decorate my tree and make my own Christmas cards. None of which I ever really have the intention of doing, but I’m under the impression that reading about it somehow awakens my “season spirit”. 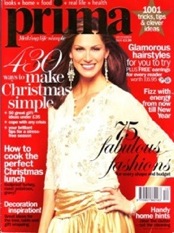 To think that there are more than 400 things to do in  order to make Christmas simple seems awfully complicated. As for the omnipresent advice about how important it is to plan ahead, well, if I had done that, I would probably be thinking about Easter right now instead of reading about the “1001 tricks, tips & clever ideas” for Christmas…

It’s not that I don’t want to plan ahead. Every year, a few days before Christmas when I’m all stressed out about the things I still haven’t done (like presents…), I promise myself that next year I’ll do better (I could hardly do worse). It never happens, because as my son said today (about something entirely different): “We’re always eaten by time”. 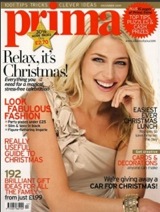 And in the end, it doesn’t matter. Christmas has never been a failure because I didn’t make my own pudding or because I wrapped my presents in newspaper, 10 minutes before putting them under the tree. As for the dinner, well I have to admit, we spend Christmas with my parents so no worries there; my mother’s the best cook in the world.

The best way to make your Christmas simpler is probably to stop comparing it to the ones pictured in the December magazines. Although even they seem to show a sense of humour nowadays. Guess what Prima’s front page advice for 2009 is? “Relax, it’s Christmas”. Now that’s funny.

It’s a question of… labels

When I was young (and I realise that writing that makes me officially old), I wore an antinuclear badge and an Amnesty International badge. All other “views” of mine were confined in my diary: lyrics, quotations and sayings like “a woman without a man is like a fish without a bicycle”.

I was against clothes “labels” and deliberately avoided them. The only time I recall ever buying a “label” it was a Benetton sweater. At the time I had a friend who swore that it was an absolute necessity to possess one and I listened to her. Luckily for me, it was one of the only times I took her advice or I might have turned out a whole lot different…

When I look at teenagers today I’m constantly amazed by the way they’re “labelled”. Some of them are wearing clothes and shoes that could pay my rent for several months. And the “badges” they sport often leave me unsettled. Today alone I saw a girl with a badge saying “ “Bad bitch”, another with a t-shirt saying “I’m a slut but not yours” and yet another who had written “I can get no satisfaction” in big black letters across her schoolbag (she was French and obviously didn’t know the real title of the song). Beside her, there was a guy wearing a t-shirt saying “I’m a pussy eater”…

I get to study young specimens every day on the subway. I notice them because they always seem to spend the whole journey looking at their reflexion in the windows. Teenagers are, by definition, pretty self-centred, but I have no recollection of having been so self-confident when I was that age. I suppose, in a way, it’s positive to have so much self-assurance. But there is no way I can understand why anyone would want to wear shoes that cost the same as a (cheap) laptop or walk around advertising that they’re a slut or a pussy-eater…

Maybe I really am getting old.

It’s a question of… finding excuses

Finding excuses starts from a very young age. My son has already perfected the art to a point where he can explain quiet convincingly why he can’t: find the laundry basket / tidy his room / do his homework now (basically: because I said so, but of course that’s not how he puts it). I don’t blame him. Making excuses is a honourable attempt to avoid getting told off, especially when you’re a child (or a man, but that’s another story).

As you get older, you start making excuses for others, starting with the guy you’re in love with (who doesn’t call because he: is afraid of committing / has got a lot of work / must spend time with his friends) or want to live with (but who can’t leave his wife because: he still loves her / she’s the mother of his children / a divorce would ruin him / she’s sick, etc., etc.).

I’ve been quiet a good excuse-finder in the “boyfriend area”, but today the only other person I find excuses for is my son. I undertake this so others might see that despite him doing or saying certain “not-so-good” things, he is a wonderful child (it’s just that he’s tired / bored in school / still so young).

I spend much more time finding excuses for myself though. What has changed is that I’m not making all these excuses to avoid getting told off (my parents and friends have long stopped listening to my excuses and tell me off anyway). I’m finding excuses for myself in order to “feel better”. I know this is plain stupid. Because ultimately, no matter how good my excuses are for not doing the things I should, I don’t feel better for not doing them.

So I’m going to try a new experiment: I’m not going to make any more excuses for myself for a month and see where it takes me. Maybe I’ll feel less of a failure – and maybe, just maybe, I might get a few more things done!

It’s a question of… getting started

There are so many things I’d like to do. Like the things I list every New Years Eve: learn Spanish, do sports, write a book, keep the bathroom clean… I’ve been enumerating the same stuff for over 10 years but just don’t seem to have the “get started – get going” gene it takes to actually do something about it. I have the material I need. I might even have the time. But I obviously don’t have what the French call “la niaque”, the fighter spirit. Where does one get that? I have no idea. I do know however that I have reached a place in my life – and an age – where things, some things at least, have to move in a new direction. Or simply move.

I googled “quotations” and “start” to find some inspiring expression about the “getting started” question, and found this: “Nobody can go back and start a new beginning, but anyone can start today and make a new ending”. It’s by Maria Robinson. I don’t have the slightest idea of who she is, there are a lot of Maria Robinsons on Google. But whoever she is, she’s probably right. So today, right here, I’m getting started… on making a new ending.