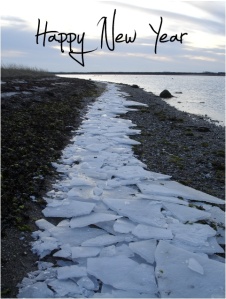 Up until I was about 17, I always spent New Year’s Eve with my parents. After that, it started getting complicated. I remember the first New Year’s party I went to “on my own” as a big deception, ending with me cleaning up while my drunken friends were either being sick or doing things they’d later regret.

For years on row in fact, the celebrations were, well, not much fun. It would start with weeks of discussing where to spend New Year’s Eve and with whom. Once this question had been solved, there would be the endless “what shall I wear” one… followed by a party that never lived up to expectations.

There are however a few New Year’s Eves I remember fondly. One was with friends I have known since school at what might have been the first real New Year’s dinner we put together. We had finally reached the age where eating real food sitting down was no longer “uncool”.

It must be mentioned that not many of these friends originated from the same country. So as we were approaching midnight, everyone started preparing different things to welcome the New Year.  Where I come from (Denmark) we either jump over string or off a sofa when the clock strikes twelve (to symbolise jumping into the New Year). Pretty simple compared to my Peruvian friend who started running round the block with a suitcase (to assure that she would be travelling) while my Spanish friend was frantically popping grapes into his mouth 12 seconds before midnight (a grape and a wish each time the clock chimed). Another friend (Italian) was strangely throwing things out of the window (to get rid of the old year), I think my Salvadorian friend was the one eating lentils (for luck) and I later found out (I won’t tell you how…) that another of my Latin American friends was wearing yellow underwear (to attract money). (I’ve forgotten what my Swedish friend was doing under the table, but it might not be related to New Year’s Eve traditions…).

In other words, thanks to all these different traditions, we had a wonderful night – and all jumped into the New Year with grapes and lentils in our mouths and a saucepan filled with coins (I can’t recall why and whose tradition that was).

This year, I’m spending New Year’s Eve with my parents. It’s become a “new” tradition since my son was born and it’s a wonderful way to start the year (and not only because of the good food). The program will be the same as every year: we’ll listen to the Queen’s speech, we’ll watch Dinner for one (“same procedure as last year”), my father and my son will shoot off fireworks, and at midnight we’ll all hold hands and jump over a string into the New Year.

Wherever you are and whatever traditions you have,

Filed under Everything counts